Twice a month we revisit some of our reader favorite posts from throughout the history of Audiotuts+. This tutorial was first published in March 2010.

Even the best track can be let down by bad arrangement. Let things slide in this area and you're in danger of losing your listeners' interest. Often getting things right in this area is down to lots of small touches. It really is all in the detail.

One area that is hugely important is creating interesting transitions and using varying fills when introducing new elements. These small sections of your track can become some of the most time consuming, but don't underestimate how important they are. Let's take a look at a few real world examples.

For the purpose of this tutorial I have mocked up a small dummy arrangement showing the transition between a few different sections of a hypothetical track. The track is very simple and has only been constructed to demonstrate the techniques included, so please no comments on how good or bad it sounds. I'm aware it's not going to win any awards!

In each step of the tutorial we'll look at different techniques for creating varied and interesting fills. These will vary in complexity and approach but by the end you should feel equipped to create your own versions.

First up let's take a look at perhaps the most simple method for moving between sections in your track, the drop. A drop is really easy to recreate and can be extremely effective, so don't be put of by its simplicity.

Basically all we are aiming to do here is remove one or more elements from the mix to drop the energy of the piece temporarily. This enables us to change the mood enough so that new elements can then be introduced effectively. In this case we have dropped the main beat and even this creates enough space to distract the listener and signal the new section. 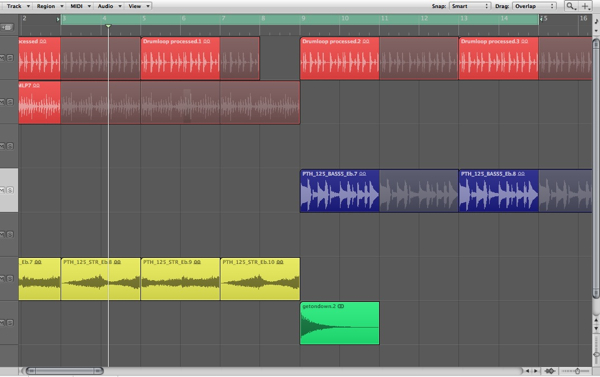 The percussion loop is also faded out over the drop using level automation and by the time the gap is bridged the new sections and bass part is introduced nicely. Sometimes a simple drop like this is all you need to get your new instrument into the mix.

Automation is also added to compliment the edit.

The drop fill in action.

An alternative to dropping the energy is to increase it. This is usually achieved by a build and builds can come in many different guises. The increased energy that a build provides means they are perfect for transitions that introduce more frantic elements or further layered parts but saying that they can also be used to introduce a sparse cut down section.

The sounds you use to create your fill can vary drastically but traditionally drums would be used. Snare and kick drum rolls have been really popular for years now and tend to lend themselves to electronic music. Although the standard 16th snare roll may still work it might be worth putting a bit more time and thought into the process and create something a bit more original.

In this example I have simply cut a section from the main drum loop, repeated it in 16th of a bar increments over half a bar and used level automation to fade the whole thing in. This isn't rocket science and creates quite a simple and effective little build. This is obviously quite a laid back track so intensity isn't really called for but in other styles these builds could be used over larger sections of the track. Extra layers and effects could also be added throughout the build to increase the tension.

... And some automation to spice things up.

Step 3: Sample and Effects Based Fills

Another way to create builds is to use samples. Of course you don't have as much flexibility here but select the right fill sample and you can really add to your track. If you aren't 100% confident in your programming abilities, using fill samples can also be a great way to introduce some groove into your transitions.

The trick to using fill samples is taking your time picking the right one. This may sound pretty obvious but often this process is rushed and the wrong fill sample can sound out of place and can make a production sound a little amateur. Take special care of the drum sound and timbre in the samples you select and try to match them with your current mix elements.

In this example I spent some time picking a suitable sample and then fine tuned it to ensure a good fit. Some light delay was added, the sample was trimmed to size and a small fade was executed to edit the end of the sample. The end result is a pretty realistic drum fill, that adds a human feel to the mix.

The sample is added to the mix.

The sample is lightly treated.

The new sample treated and in place.

If you're after something a little more technical then you may want to program your own fills and breaks. This approach will give you a more electronic feel but executed well it can work with most genres. There are no hard and fast rules here, its all about creativity. Any element in your mix can be cut up and programmed as a fill. Obviously drums are the obvious choice but you can also try instruments and effects.

In this example I dissected the main drum loop into its component parts and created a new pattern by placing the slices in various locations. I also created some buffer repeats and used pan and volume automation to mix things up a little. If you are using midi this process is even easier and the only real limit here is your imagination. With practice a new pattern like this can be created very quickly. 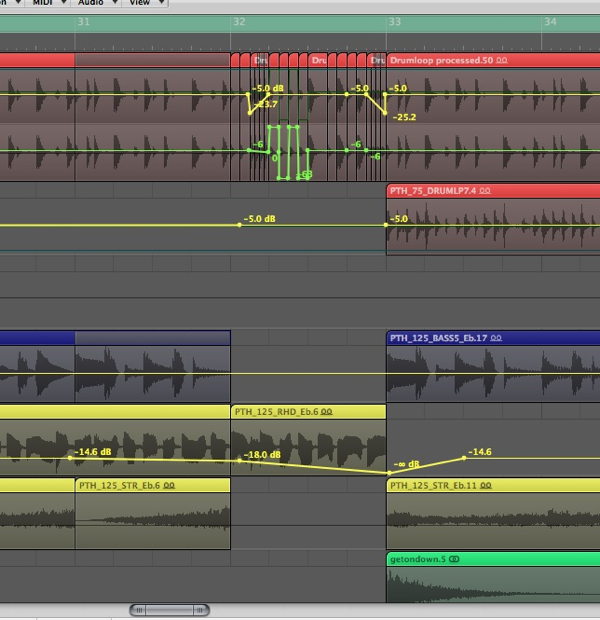 The new programmed fill with automation

A close up of the programming

The programmed fill in the mix.

Up until this point all the techniques shown have involved manipulating exciting audio or samples. You can however create builds and fills without performing a single edit, this achieved through the use of automation.

As you may of noticed in the previous examples I have used volume and pan automation to compliment the edits, but the last fill/build in our mini track simply adds reverb to the percussion loop over about 4 bars. The bass is then faded out in volume and the main drum loop is filtered over the same time using a very simple stock low pass filter. 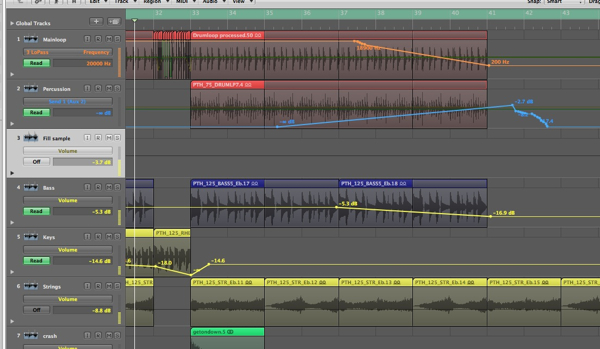 The automation creating the build.

The Automation based build.

This is all simple stuff but combined it creates a slow mutation and a wash of reverb that moves us into the final part of the arrangement very smoothly. This sort of technique can work really well when moving into breakdowns or more minimal sections of your track.

If these small tips have been useful to you let me know and I'll expand on the whole subject of arrangement and create some more tutorials for you all. 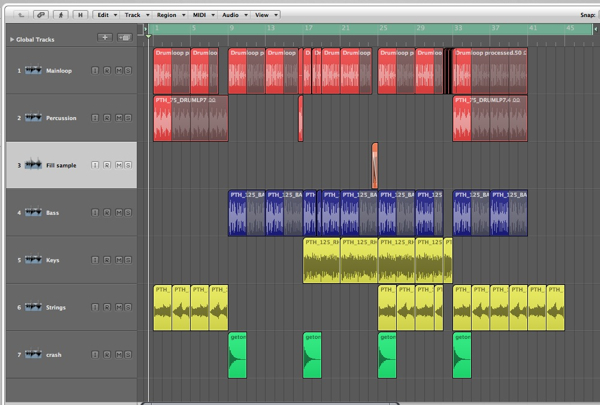 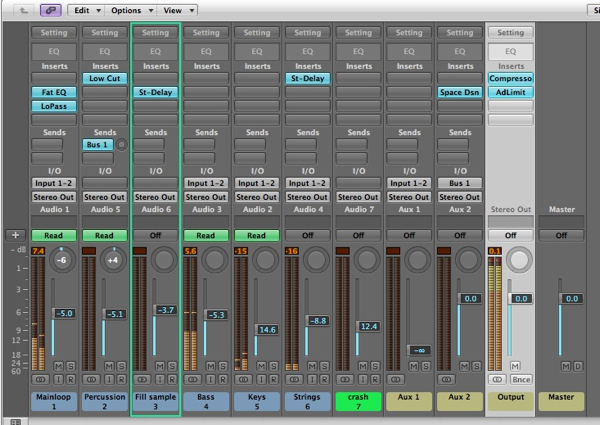