If you followed the last few parts of this series then you'll know that we are looking at a group of synth patches that represent the building blocks of subtractive synthesis. In the first instalment we looked out how to manipulate a simple noise oscillator and then we looked at how to create a really useable pad sound.

In this instalment we'll take a look at how to create a solid synth bass patch, an essential part of any synthesists armoury. The last tutorial was completed using Cubase 5.5's Prologue synth, this time around I'll be using Propellerheads Thor from Reason 5 / Record 1.5. In fact I'll be using a different instrument for each instalment, to show that these techniques are truly generic in nature.

So, what makes a good synth bass? Well to be honest that's a tough question and hugely subjective but saying that there are some qualities that most of us find pretty satisfying. It goes without saying that a bass should have a solid low end. Also some filtering and light use of effects can make things interesting.

Due to the fact that the bass patches you'll eventually create yourselves will be infinitely varied, I can only show you one possibility. Because of this I thought I'd demonstrate how to program a classic Moog sounding analog bass patch. This should be a useful sound, regardless of the genre you work with and it will give you a great bass-is with which to start. (Sorry I couldn't help it!)

As usual I have started with an initialised patch that consists of a single sawtooth waveform, an open low pass filter and very basic envelope settings. It's always a good idea to start with a clean slate and very few modulations when creating your own patch.

The initialised patch in Thor.

I then moved on to adding a second saw wave, detuning them for some 'fatness' and finished off with a sub oscillator, in the form of a sine wave a whole octave below the others. Below you can here the oscillators with and without the sub.

Please note this isn't the best bass line I've ever written, it was just thrown together to demonstrate the patch !! 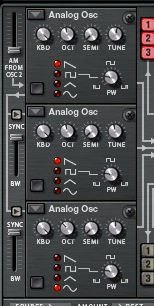 The three oscillators are loaded.

... and now with a sub oscillator

When it comes to bass patches there aren't many that don't require some heavy filtering. Generally low pass filters are used to remove high end frequencies and add resonance, for extra harmonic content. Many filters also feature a drive function which can impart from extra grit and edge to your patch if needed.

In this case I've opted for a low pass model and removed loads of top end. This gives the patch a warmer, more rounded character. Don't worry about it being a little static as we'll sort that in the next stages. Also you may be able to hear some clicks and pops, this is due to the default amplifier envelope settings and will also be rectified in the next step.

The patch with some basic filtering.

First up I turned my attention to the dynamics of the sound, all in all I was pretty happy with the way the patch played. The main issue for me was the clicks and pops I was hearing. These are caused by zero settings in both the attack and release phase of a typical ADSR envelope.

Essentially you are hearing the sound moving from nothing to something in a very short time. This results in a click and it can also occur when the sound ends. By moving the attack and release settings up even a small amount you can pretty much eradicate these clicks.

The amplitude envelope is altered to avoid clicks and pops.

The clicks and pops are just about gone

The next step was to look at our envelope settings was to spice up the filtering a touch. As I previously mentioned it was a little static and some dynamic movement was needed. We can introduce this by using Tho's dedicated filter envelope.

A simple decay based envelope setting was used here and then the envelope modulation was turned up the filter. This really brings the whole patch to life and with a touch more resonance, it really starts to take on that Moog like character.

The filter is tweaked to accommodate the new envelope setting.

And the dedicated filter envelope is activated.

Most analog style bass sounds are monophonic in nature and as my initial patch was already playing back in a monophonic mode no change had to be made here. Saying that some portamento was used in the voicing area.

Some portamento is added.

Some subtle effects were also applied to add some sheen to the patch. A very small amount of chorus and soft saturation were used. This simply gave the patch a little crunch and depth.

... and finally some chorus.

The final patch with a few effects

As you can see this is a very straight forward sound to reproduce and is a great starting point for more complex bass patches. You should find you are able to program this sound on pretty much any soft synth, so if you don't have Reason try to recreate it using your favourite instrument. 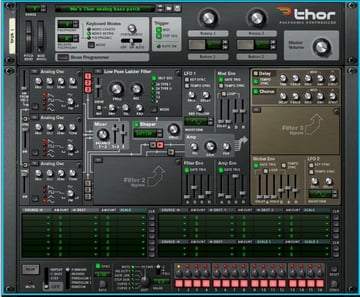